You know you’re in India when you find yourself at a Hindu festival, dancing around a blaring to distortion music truck-ette with women of all ages in sari’s doing what appears to be a line dance of sorts involving clapping. You’re doing this in 40C heat, dust everywhere, perspiring profusely, you’ve lost your water bottle to a well meaning toothless Hindi matron, and along with everyone else there, you just drank a bhang lassi, kids and all! This all happened to me yesterday, my first experience of Shivatri, and it was wonderful.

The last couple of weeks have been incredibly busy as I have at last found my niche, acquired more students, and dived headfirst into lesson planning and revising my own somewhat rusty grammar. I also managed to squeeze in a trip to Udaipur to see the tourist side of India, drink a couple of beers, and get my first tummy bug, fortunately a very mild one! There’s probably worse to come….

I teach four days a week, and do two afternoons at the local girls’ school and hostel where we draw, talk, and play games – it’s all about improving their English while having a bit of fun and creativity added to their curriculum. The girls come from remote villages and spend the majority of the year living here in the hostel under the stern but loving care of “Grumatta”. I have no idea at all how to spell it, but that is exactly how it sounds – she is the principal, an elderly lady with a lovely smile and a wonderful way with the girls. They learn English but at a pretty basic level, and I have girls of about 13 to 15 years of age with me every Tuesday and Thursday for an hour and a half. It’s hectic, especially the first time, when I found myself facing a class of 89 students, completely unprepared, and literally dry-mouthed and shaking! That day I blundered through by talking about Australia mostly, hopping round like a kangaroo and drawing maps and pictures on the board which entertained them no end. I was much better prepared for the next class, arranging for another volunteer to come with me to help out, and armed with three packets of Tesco coloured pencils and a ream of A4 paper, two Memory card games I had made, and determined to split them into two groups at least… but it turned out that Grumatta had been trying to tell me the time before that this was a one off and I would normally only have the Standard 9 pupils… a mere forty over excited teenagers. Piece of cake.

It gave me more of a chance to talk to them and get to know them as well, which was lovely. Their delight at being given clean sheets of A4 and told they could draw anything they wanted was immense, and I had to promise faithfully that the group playing games would swap with the artists at halftime; even though they were enjoying the memory game, the appeal of drawing was stronger. I have managed to convey to them that they are going to be making a scrapbook of their art to keep, take home when they go for their holidays in about six weeks, whatever, and that they must put their names on their drawings.. actually it’s a cunning scheme to help me remember their names as well, and I have yet to find scrapbooks here anywhere and will have to resort to making folders out of the beautiful cardboard from the paper mill… ah, the paper mill, a whole other story in a moment. 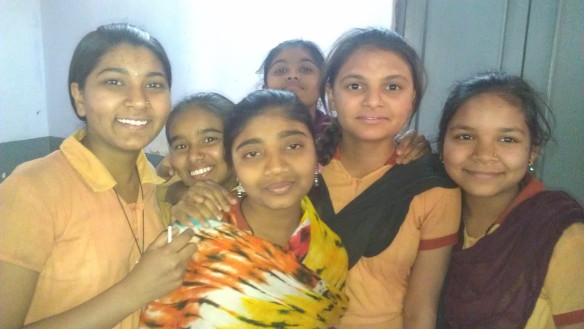 There were a couple of common themes in their chosen subjects, a landscape which they call a nature picture, very standardised with rounded mountains and a stream in the foreground; mehndi, the traditional designs drawn with henna on the hands and feet; and geometric shapes where the chief delight was colour. We’ll work on broadening their range! The stand out artists were two quiet girls who both chose to draw the outline of a hand on their paper and then apply the mehndi, one in particular was exceptionally good with masses of fine detail intricately drawn. Chaimalka, a cute little snub nosed happy creature with, sadly, front teeth already damaged and brown, always starts with a square, fills it with neat triangles, then asks for another sheet and gets carried away with brilliantly coloured garlands of lotus’ and roses – Usmila always draws the same landscape but with different elements – her last one had little fish leaping out of the stream in the foreground. I took some cheap felt pens I found at the local stationer last session, they were so excited, and the flower garlands were even brighter! Bhavika wants to be a teacher when she grows up and does our names in bubble writing every time, and Khushba colours her paper and then folds little boxes with lids.

We have added to the game repertoire as well, I found reasonably priced board games at Himalaya Mall the other day and took Snakes and Ladders and Jenga in for them, and will go there again and add Twister and Junior Scrabble next week. Twister should be fun! I’m also now able to go to a large stationer and buy poster paints, easels, and brushes for them thanks to the generosity of a dear friend.

There’s another wonderful thing that has happened. I had been building up to buying dictionaries for my Saturday class. I can buy the Oxford English dictionary here for RS320, and have purchased one for each of my adult students (they call them their new Bibles!) as it is such an aid to them – most have a small Gujerati to English one, but had never seen a proper one before. As part of their learning is to read English language novels, they can now look up words they don’t understand, and are under strict instruction to read the definitions of one or two words either side as well.  However, it’s been biting into my fairly tight budget, so I thought I would see if anyone wanted to help – so many friends have been asking me what they can do. The power of social media… I am off today to buy not only the dictionaries I asked for help with, but art supplies as well. Bless you all who helped, I’ll post pics for you all on FB and here, and won’t hesitate to let you know when something else comes up. We all want to help, but it’s hard to know how; hopefully by this means you will get a much more personal experience than by chucking $5 in the World Vision collecting box. It’s something I have been talking to MS about, making it easier for people who can’t actually come here to volunteer to still do a little bit to help, and gain a better understanding of exactly what the issues we are dealing with are.

So much more to tell….. later!

2 thoughts on “You know you’re in India when…”